Owha is the name of a resident leopard seal here in New Zealand. This is a relatively new event and as a biologist I thought I would share information with you about these seals and Owha in particular.

Leopard seals are the second largest species of seal (after the southern elephant seal) and second top predator (after the killer whale) residing in Antarctica. They are pagophilic, or ice loving, seals that follow the expansion and contraction of Antarctic sea ice. There are an estimated 220,000-440,000 individuals.

Leopard seals are “true seals”, having short front flippers and an internal ear canal (as apposed to sea lions that have long front flippers and rotating hind flippers which they use to “walk” and an external ear flap). These seals have massive heads and jaws lined with sharp teeth. There coat of silver to dark gray is counter-shaded for maximum camouflage in the water for when they hunt fish, birds (penguins!), and pinnipeds. Females tend to be slightly larger and an adult can weight between 200-600 kg (440-1320 lb).

Leopard seals are typically solitary. Males mate with multiple females during the mating period of December to January. Mating occurs in the water but parenting duties are solely female. After about a month, the single pup is weaned. They are very vocal, with males being louder, typically. They can live between 15 and 26 years old.

They are a curious by nature and very powerful. Not all behavior is predatory, with “playful” encounters with penguins having been observed. Only one human death by leopard seal is known.

Currently, leopard seals are protected in NZ and are considered a vagrant animal. However, current research is studying if leopard seals really are vagrant or if they are more resident to NZ than we previously thought. 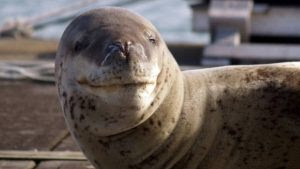 Owha is a female leopard seal who has lived in the Auckland area of NZ for at least 6 years. She was first photographed in Dunedin in 2012, but has traveled north and was seen for the first time in the North Isand in 2015. She was named by the local Maori hapu tribe, translated to mean “treasured gift from our ancestors”. Her favorite place to haul out and rest is on marina pontoons.  Most of her time is spent within the marinas. When hauled out, Owha and other leopard seals only want to sleep and rest. She can be identified by the unique spot and scar patterns, making photo identification possible. In this way, more than twenty other leopard seals have been identified in NZ waters with over 100 reported sightings in the last two years.

Leopardseals.org is a private organization tasked with researching and monitoring leopard seal presence in NZ. When Owha or another seal is reported, they will set up a 20m protective area around the animal for protection. Through their research of Owha, especially through photo identification and historical records, they have determined that leopard seals visit NZ waters more often that originally though. 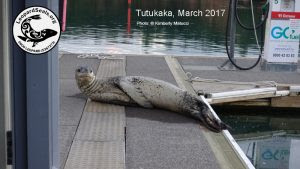 Her proximity to humans and personal property has caused conflict between humans, some even demanding removal or lethal action. When threatened, leopard seals show aggressive behavior, warning the threat by opening its mouth and hissing. However, the only recorded aggression from her occurs when humans approach her (i.e., threatened!). Selfies with marine animals (including penguins) has become a more popular, and increasingly detrimental occurrence.  It is also important to note that any annoyance to or harassment of a leopard seal is illegal. We certainly would not want to be surprised photographed or touched by a stranger while we slept! She is a predator and needs to be respected for her power and, at the same time, her beauty. All animals should be given their space and freedom. We share their home as much as they live in ours.

That being said, many locals are excited to have her visiting. It is a rare event that humans can see such an animal, let alone live beside it. In addition, her presence is allowing important research to be done. Her movements have been recorded for the past six years, the longest continuous record for any leopard seal, including Antarctica.

To keep up to date with Owha and the leopard seals in NZ, please head to the website www.leopardseals.org or follow their Facebook page. For any NZ resident, if you spot a leopard seal in NZ, please report the sighting to 0800 LEOPARD.